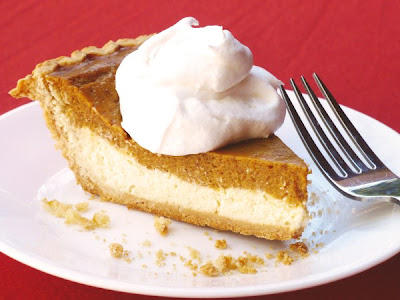 This is the other pie I made for Thanksgiving.  My daughter is in love with it and ate two pieces of it on Monday.  I love that it combines two of my favorite desserts: cheesecake and pumpkin pie.  Mine didn't turn out as pretty as the one on the King Arthur Flour website, but it still looks good enough to eat.

The recipe makes more pumpkin filling than will fit in the pie, so I just put the rest of it in a ramekin and baked it alongside the pie until it was done.  Who doesn't love a recipe that results in a bonus dessert?

In a medium bowl, beat together cream cheese and sugar until smooth.  Beat in egg and vanilla until incorporated and pour mixture into the pie crust.  Refrigerate while making the pumpkin filling.

Preheat oven to 425 degrees.  In a large bowl, mix together the sugar, salt, and spices.  Add pumpkin, evaporated milk, and eggs and whisk gently until smooth.  Slowly and carefully spoon pumpkin mixture over the cheesecake filling (you may have some leftover - see note above).

Bake for 15 minutes at 425 degrees then reduce heat to 350 degrees and bake for 40-45 minutes.  Pie is done when it looks set, but center is still a bit wobbly.  Cool to room temperature and then refrigerate until serving.

Note:  I like to wrap strips of aluminum foil around the edge of the pie crust before filling, then remove the foil about 20 minutes before pie is done baking.  This keeps the crust from getting too brown.
Posted by The Tall Girl Cooks at 9:00 AM