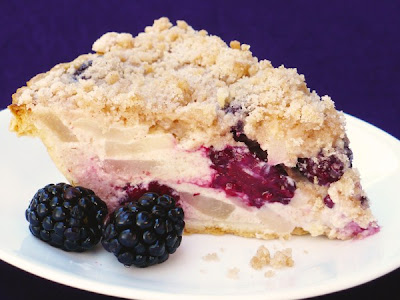 We had our Thanksgiving with extended family this year and their tradition is for everyone to bring a different pie (or two).  I was excited for the opportunity to try out a new recipe that I'd been thinking about for a while.  I found a recipe for Pear Crumble Pie on Food.com and thought it sounded different and yummy.  It has a custardy fruit filling and a crisp crumble topping - what's not to love?  But, as usual, I wanted to mix it up and decided to add some blackberries with the pears.

I may be wrong, but it seems that the combination of blackberries and pears is a British thing.  Almost every "blackberry pear" recipe I found on Google was from a British website and all measurements were in metric.  What gives?  Are we Americans just not hip to this fruit combination?

Anyway, my husband and mother-in-law liked this pie and I think it's darn yummy, myself.  If you are looking to make something different for a potluck or family party this year, here's your pie!

Preheat oven to 375 degrees.  In a large bowl, whisk together egg, sour cream, 1/2 cup sugar, 2 Tbsp. flour, vanilla, and spices.  Fold in the pears and blackberries.  Carefully pour mixture into the pastry shell and bake for 40 minutes.*

While the pie is baking, make the crumble:  in a medium bowl, mix together flour, sugar, and cinnamon.  Cut in the butter with a pastry blender or fork until crumbly.  After the pie has baked 40 minutes, sprinkle the crumble topping on.  Return to oven for 20 minutes longer.  Let cool before serving.  Refrigerate leftovers.

* To keep the crust edge from over-browning, I like to wrap the edge in aluminum foil before filling.  Then remove foil when adding the crumble topping.
Posted by The Tall Girl Cooks at 9:00 AM