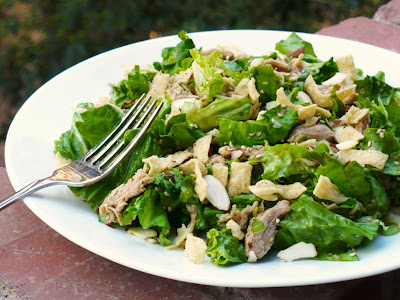 We've had this recipe in my family for years.  My mother got it from my aunt Renee, who was a wealth of yummy recipes.  This salad is always popular and can serve as a light main course or tasty side.

Traditionally, we've made this with iceberg lettuce, though romaine works as well.  I had to use greenleaf lettuce this time around because neither the iceberg nor romaine looked any good at the store recently.  I don't recommend it.  Greenleaf is way too flimsy to hold up to dressing for more than 10 minutes.  Wilty lettuce is very disappointing.

The best ingredient in this salad, in my humble opinion, is the fried wontons.  Usually we just fry up half a package of won ton wrappers and then break them into bite-size pieces, but lately I have discovered these beauties: 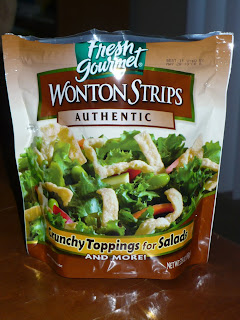 Pre-made crunchy won ton strips!  How cool is that?  Now I don't have to listen to my smoke detector go off while I fry won tons.  I found them in the produce section of my local Fry's (that's the same as Kroger or Smith's).  However, it was a miracle that I saw them because they were hanging up high, over the refrigerated salad dressing.  I mean, how often do you look up in the produce section?  There were even a couple of flavored varieties.  I thought the Ginger and Garlic sounded yummy.  If you can't find them, don't despair.  Here is a video that shows you how easy it is to make your own fried won tons (though I recommend using a pair of tongs instead).

Marinade for chicken:
3 Tbsp. soy sauce (I like the low-sodium variety)
1 Tbsp. sugar

In a medium bowl, mix together the soy sauce and 1 Tbsp. sugar for marinade.  Add the chicken and toss to coat.  Cover with plastic wrap and refrigerate for at least one hour to soak up flavor.

Combine dressing ingredients in a jar or plastic container with a tight-fitting lid.  Shake until well mixed.

In a large bowl, combine chopped lettuce, chicken, green onions, almonds, and sesame seeds.  Pour on the dressing, a little at a time (you probably won't need all of it), tossing the salad to coat.  Mix in won tons just before serving.

Posted by The Tall Girl Cooks at 9:00 AM