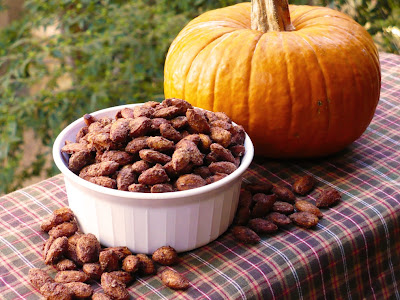 So, I've made homemade Smoked Almonds and Cinnamon Sugar Almonds before for my husband who loves nuts.  When I found raw almonds on sale for $2.99 a pound at a local store, I thought I'd make him some more.  And then I wondered if they would be good with pumpkin pie spice and ... they are!  But I think the vanilla in this recipe is what sends these nuts over the top.  Even my daughter can't stop eating them and tells me they taste like pumpkin pie.

These make a great snack and would be a yummy gift for someone over the holidays.

In a large bowl, whisk the egg whites until frothy; whisk in vanilla.  Stir in the almonds until evenly coated.  In another bowl, mix together sugars, salt, and pumpkin pie spice until thoroughly mixed.  Add spice mixture to almonds and toss to coat.

Spread almonds in a single layer on each baking sheet.  Bake for 15 minutes, then stir.  Bake 15 minutes more and then let cool.  Store in an airtight container.