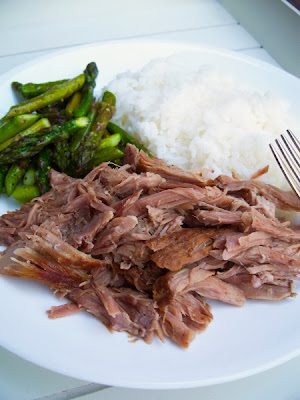 I can't believe it's taken me this long to share this recipe.  My mother grew up in Hawaii and I spent most of my summers there as a child, visiting my grandparents.  I think the only Hawaiian food I love more than poi is Kalua pork.  I was raised on this stuff.  And anyone who marries into our family knows that several times a year, Kalua pork is the dish of choice for Sunday meals.  Because Kalua pork, while delicious, is also high in fat and sodium and is therefore something not to be eaten every day.  Especially if you are like me and can't control yourself and go and pick at the leftovers in the fridge.

The best cut of meat for the job is Boston butt, a.k.a. a pork shoulder roast.  They aren't small cuts, so you are looking at something between 7 and 12 pounds.  You will also need liquid smoke.  It comes in a bottle like this: 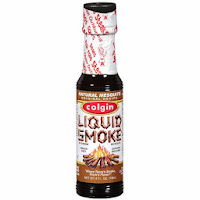 You will most likely find it around the ketchup and barbecue sauces in your grocery store.  Usually you have a choice of hickory or mesquite.  You can use either, but I've been using mesquite lately.  For a smaller roast, you will use about half of the bottle.  For a larger roast, my dad isn't shy about using the entire 4 oz. bottle.

The last ingredient is coarse sea salt.  Coarse sea salt has a lower sodium content by volume than regular table salt, so it's not interchangeable.  However, if you are in a pinch, you can sub Kosher salt.

Line a large baking dish with heavy duty aluminum foil (enough to cover entire roast).  Place roast inside and prick all surfaces of roast with a fork.  Rub liquid smoke (about 2 oz for a small roast, 4 oz for a large one) all over roast.  I usually cut away the meat from the center bone and rub some smoke into the cavity as well.  Place roast with fat side up, wrap roast in foil, and refrigerate overnight.

In the morning, remove the roast from the refrigerator and let stand about 15-20 minutes.  Preheat oven to 500 degrees (yes you read that right, 500 degrees Fahrenheit).  Sprinkle sea salt over fat on top of roast to create a thin salt crust: 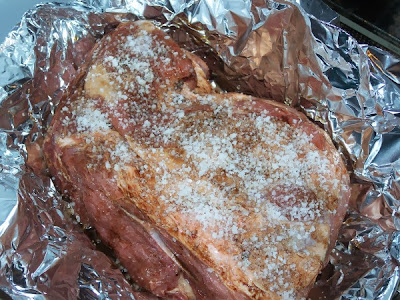 Wrap roast tightly in foil again and place in the oven at 500 degrees for 15 minutes.  Reduce oven temp to 300 degrees and cook 1 hour for each pound of pork (ex: 7 lb roast = 7 hours).  Remove from oven and let stand for 15-20 minutes before opening foil and shredding pork.  I like to add a little bit of the pan juices to the shredded pork for even more flavor.  Ono! 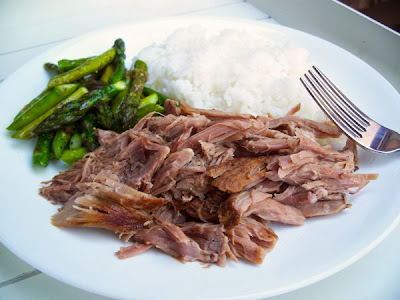 Posted by The Tall Girl Cooks at 8:00 AM No comments: 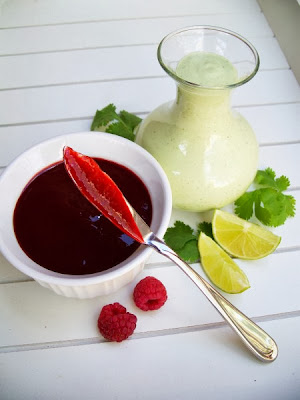 Last October we had a weekend where we had two family weddings to attend in addition to our church's children's program.  It was crazy, but it was great.  My parents flew out for the occasion and my family was in charge of catering one of the wedding luncheons.  However, this post is about the other wedding luncheon since that is where I encountered something new to me.  The combination of raspberries and chipotle peppers!

The (other) luncheon was catered by a local Mexican restaurant and was a do-it-yourself taco bar.  Genius!  One of the options was raspberry chipotle chicken.  At first I thought, "Huh?" but I tried it anyway and, oh my, was I hooked!  What a great combination of sweet and tangy and spicy!  And to top it off, they offered a delicious cilantro avocado dressing to drizzle over your tacos.  I loved how it cooled down your mouth from the spice of the chipotle peppers (although, let's be honest - it wasn't that spicy).  I filed it away as something to try at home.

Well, here we are a year later and I finally got around to it.  I investigated recipes for raspberry chipotle sauce and cilantro avocado dressing and never found exactly what I was looking for, but I came close enough.  I ended up adapting each recipe to fit what I wanted.

If you don't already know, chipotle peppers in adobo sauce are most likely found in the Hispanic food section of your grocery store.  They come in a little can like this: 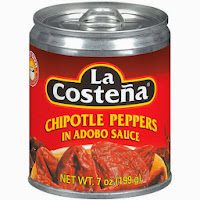 They pack some heat, but in this sauce I would say the heat is between mild and medium.  Even my 9-year-old daughter loved it and she's not a fan of spicy.  And if you strain the sauce like I do, you lose not only the raspberry seeds but any remaining bits of pepper that might ignite your tastebuds.  If you're wondering what to do with the remaining peppers and sauce, someone recommended throwing the leftover peppers into a food processor, separating them into tablespoonfuls on a plate, and then freezing them.  Once they are frozen, throw them all into a ziploc bag in the freezer.  Then you have perfect portions for flavoring soups or what not.

I've used the raspberry chipotle sauce two ways so far:  mixed with shredded chicken for tacos (like my first encounter) and used as a glaze over pork chops.  For the chicken, I prepared it with my usual taco seasoning first and then added a few dollops of sauce.  Prepare yourself - the chicken will turn a purple-y color from the raspberries.  If this bothers you, you could always just spoon a little sauce into your taco instead.  I also drizzled the cilantro avocado dressing in the tacos and it was delicious!

For the pork chops, I just sprinkled them with a little seasoned salt and sauteed them in a little olive oil until browned and cooked through.  Then I brushed on the sauce.  Divine!  Serve them with salad drizzled with cilantro avocado dressing and you've got your second meal: 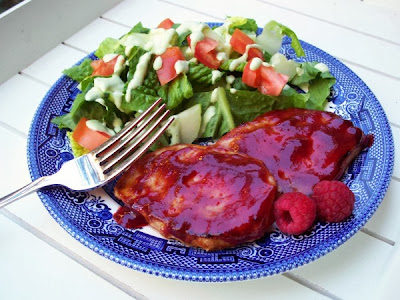 I've also read that people like to pour it over a block of softened cream cheese and serve it with crackers for an appetizer.  There are so many possibilities with this sauce since it pairs well with chicken, beef, pork, and probably fish as well.

Whatever you do, just try it!  I'm pretty sure you'll love it too.

In a small saucepan, combine all ingredients over medium heat, mashing the raspberries.  Bring to a gentle boil, then reduce heat and simmer until sauce is thickened and reduced by half (about 15 minutes), stirring occasionally.  Strain sauce through a fine mesh sieve, if desired.  Makes a little over 1 cup of strained sauce.  Can be refrigerated up to two weeks.

Combine all ingredients in a blender and process until smooth.  Chill until ready to serve.  Makes a little over 2 cups.  Can be refrigerated up to 5 days.
Posted by The Tall Girl Cooks at 8:00 AM No comments: 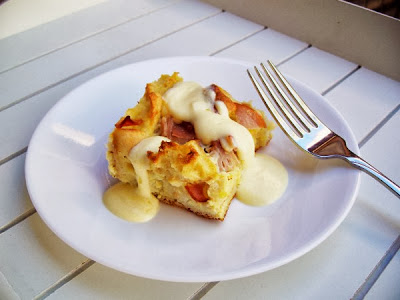 I made this casserole to bring to a brunch our family attended earlier in the month.  I like it because it's different from the usual egg casseroles I make.  The Hollandaise sauce totally makes it.  The hardest part of this recipe is finding Canadian bacon!  I finally found some in the lunch meat section of my local grocery store, next to the pepperoni.

The Hollandaise sauce would also be delicious over veggies like asparagus or broccoli.  Yum!

Spread the cubed English muffins and diced Canadian bacon evenly in a 9x13 baking dish.  In a large bowl, beat the 8 eggs, then whisk in the milk and onion powder.  Pour over the muffins and bacon.  Cover and refrigerate overnight.

Remove dish from refrigerator and let casserole come to room temp (about 20 minutes or so).  Preheat oven to 350 degrees.  Bake, covered for 35 minutes.  Remove cover and bake another 15-20 minutes or until center is set.  Let stand 5 minutes before serving.

While casserole is baking, prepare the Hollandaise sauce:

In a microwave-safe bowl, melt butter and let cool slightly.  Whisk in beaten eggs, then whisk in cream and lemon juice until smooth.  Heat the mixture in the microwave on HIGH for 1-2 minutes, beating after every 20 seconds until the mixture thickens.*  Stir in Dijon mustard.  Serve with casserole.


*I have a pathetic 700 watt microwave.  It took me more like 3 minutes to get my sauce to thicken.  Just keep this in mind if you also have a wimpy microwave. 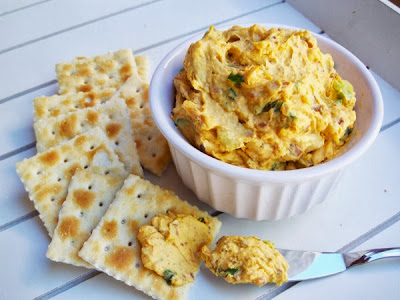 I made this on Sunday for a little pumpkin-themed potluck get together after church.  I found the recipe on Gimme Some Oven after searching Google for "savory pumpkin recipes" Saturday night.  I actually had all the ingredients on hand - woo hoo!  Well, except the roasted pecans.  I did have some raw almonds, so I roasted those instead.  The dip was popular, so I figured I ought to share it here.


In a medium bowl, beat together cream cheese, pumpkin, and seasoned salt.  Stir in remaining ingredients.  Serve immediately or cover and refrigerate until serving.

Here's a photo of the dip from Sunday: 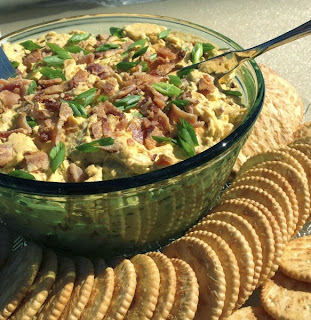 It looks great garnished with crumbled bacon and green onions.
Posted by The Tall Girl Cooks at 8:00 AM No comments: 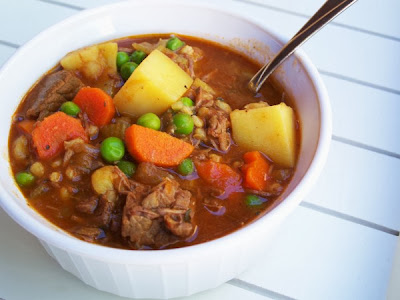 I posted this recipe back in November of 2010.  I think it's delicious and it's a great ending to a cool day. I've started adding frozen peas at the end for a pop of color and flavor.  Sometimes I add some pearl barley instead of thickening the stew with cornstarch.  If you want to add barley, stir in about 1/2 cup when you add the potatoes and other veggies.  For the best browning results, pat the beef dry with paper towels before adding it to the pot.

Brown beef in oil in a large stockpot or Dutch oven over medium heat, sprinkling beef with salt, pepper, and a little garlic powder. Add beef broth, rosemary, parsley, and 1/2 tsp. pepper and bring to a boil; reduce heat, cover, and simmer for 1 hour.

Add potatoes, celery, carrots, onion, and tomato soup. Return to a boil then reduce heat, cover, and simmer again for 50 minutes. Stir in peas and cornstarch and water mixture to thicken and simmer for 5 minutes more before serving.