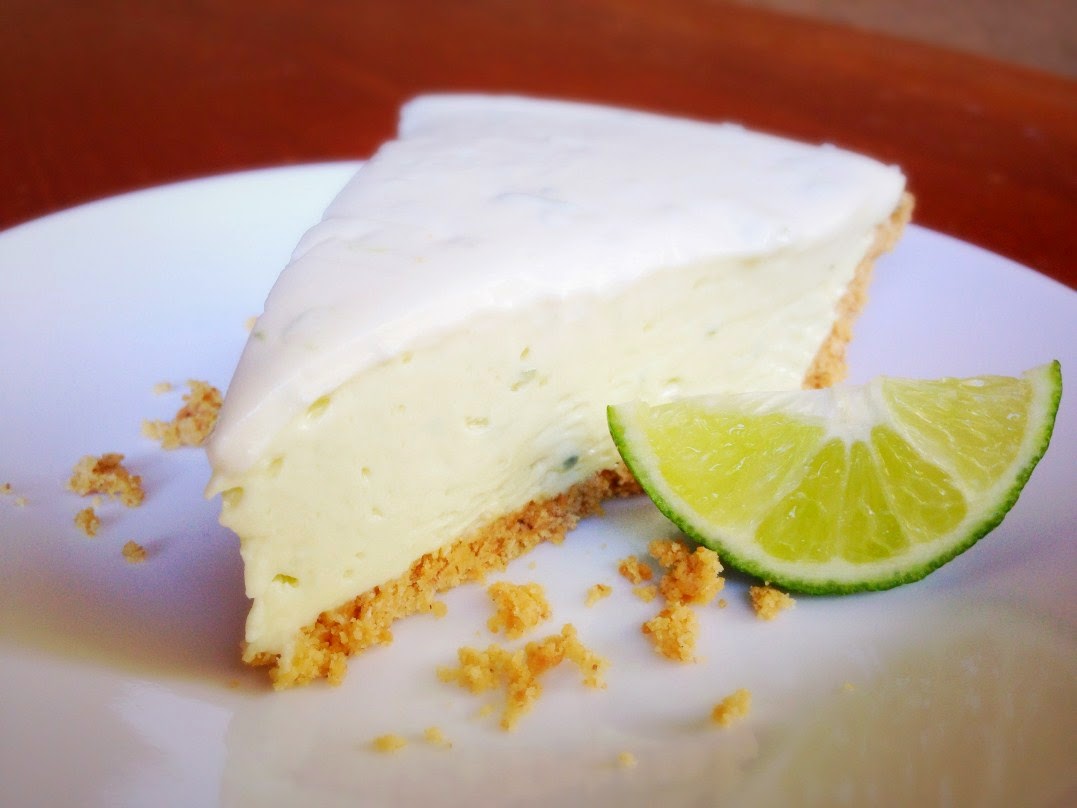 I posted this recipe waaaaay back in September of 2009!  I don't think it got a lot of attention because the photo I posted with it was TERRIBLE.  Finally, finally I have a photo worthy of this simple, yet elegant pie.  Doesn't it look scrumptious?  I recently served it to some sister missionaries from our church and it was a hit.  The sour cream topping is a recent addition and it goes perfectly with this lightly tart and seriously creamy dessert.  Just looking at the photo makes me want to make another one!

3 limes is about all you need for the juice (maybe 4 or more IF your limes are really small or if you don't have a good juicer like this one).  Before juicing, I reserve the zest of one in a covered container to use for the topping later, and zest another one into the bowl for the juice.  That way there is no waste!

In a mixing bowl, beat cream cheese until smooth. Slowly beat in condensed milk, lime juice, and vanilla; beat until smooth. Pour into the crust. Refrigerate for 2 hours.

In a small bowl, whisk together sour cream, zest, and sugar until smooth.  Spread gently over pie.  Chill for another hour or overnight. 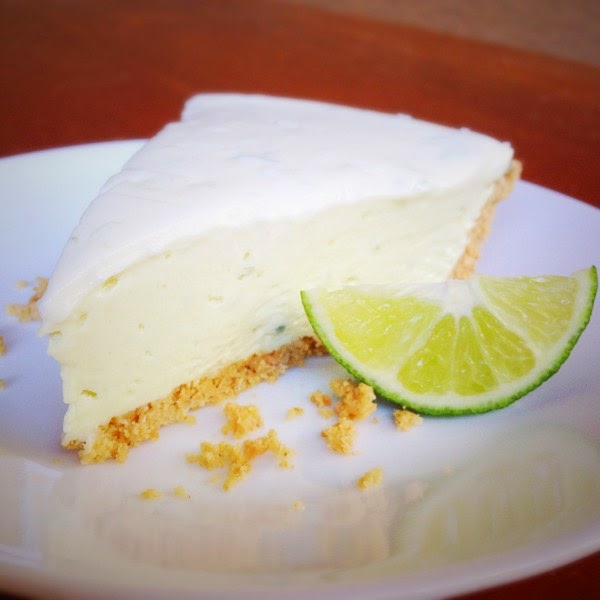 Email ThisBlogThis!Share to TwitterShare to FacebookShare to Pinterest
Labels: Pies 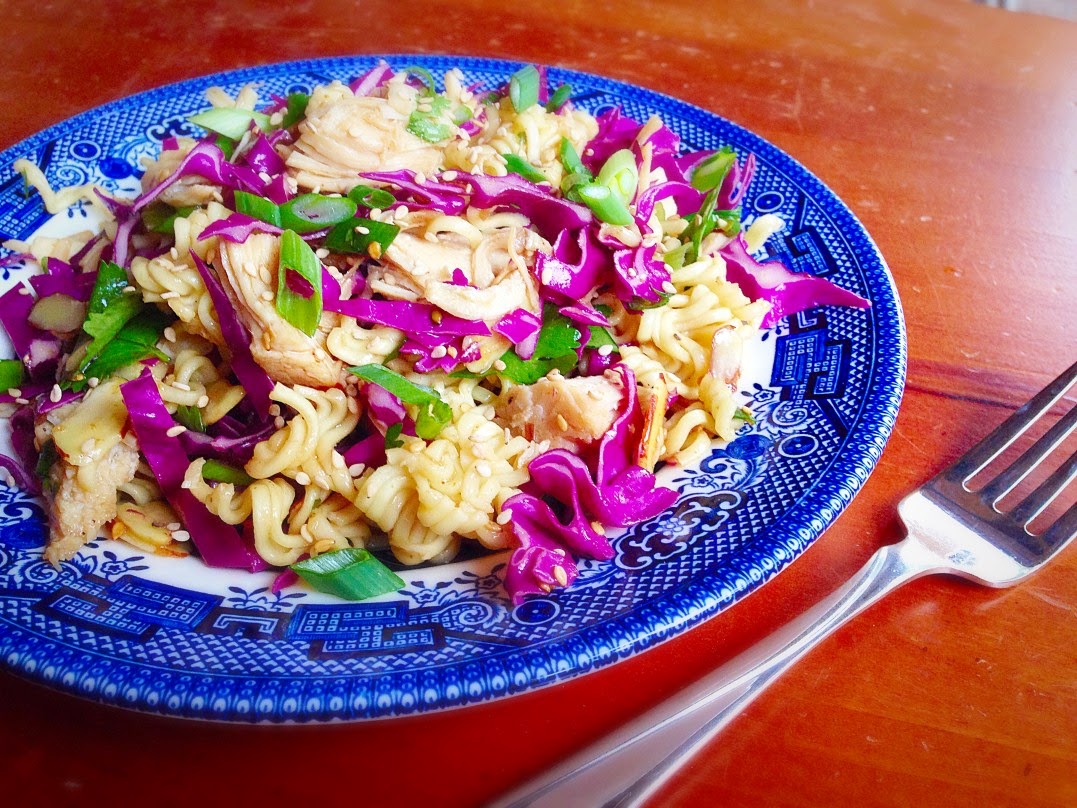 The first time I had this salad was back in October of last year.  I was in Georgia visiting old friends and they shared this recipe with me.  I LOVED it!  Not only is it pretty to look at with the red cabbage and green onions, but it tastes FABULOUS.  There is so much fun for your mouth - crunchy cabbage and almonds, soft yet firm ramen noodles, and the slight spice of cilantro.  The recipe makes a lot: doubling it would definitely feed a crowd.  And for a great price!  Many of the ingredients are super cheap.  I plan to take this next time I'm invited to a potluck.

The dressing comes from a bottle, and while I'm usually more inclined to make my own dressing, I doubt I could top the flavor of this one.  It's Ken's Steak House Lite Asian Sesame with Ginger & Soy: 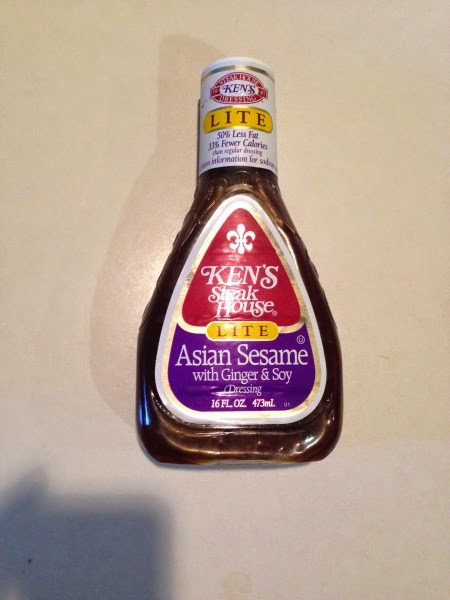 You'll only use 1/2 a bottle for the recipe below, but the flavor of this stuff is amazing.  You won't regret having some left over.

This can be made the day before, but I really think it's best the day of (though it does need to chill an hour or so for the flavors to fully develop).  I've eaten it 2 days later and still been happy with it.  I've been told it holds up left out in the heat on a buffet, but haven't tried that out yet myself.

In a large bowl, toss chicken with about 1/4 cup of dressing.  Set aside.

In a skillet over medium heat, toast sesame seeds and almonds just until fragrant and light, light brown.  Remove from heat and let cool.

In a large pot, bring 2 quarts of water mixed with ramen flavor packets to a boil.  Break ramen into quarters like so: 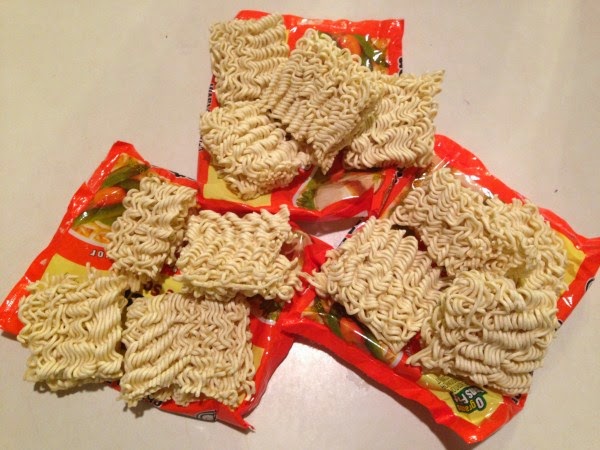 Add ramen to boiling water and cook for 30 seconds (this is to simply soften the noodles slightly, not cook them); drain and toss with a little olive oil to prevent sticking.  Remove to a cutting board and roughly chop the ramen: Add the cabbage, ramen, onions, cilantro, almonds, and sesame seeds to the chicken in the large bowl.  Toss with about 1/2 the bottle of dressing, or to taste.  Cover and chill for at least 1 hour before serving. 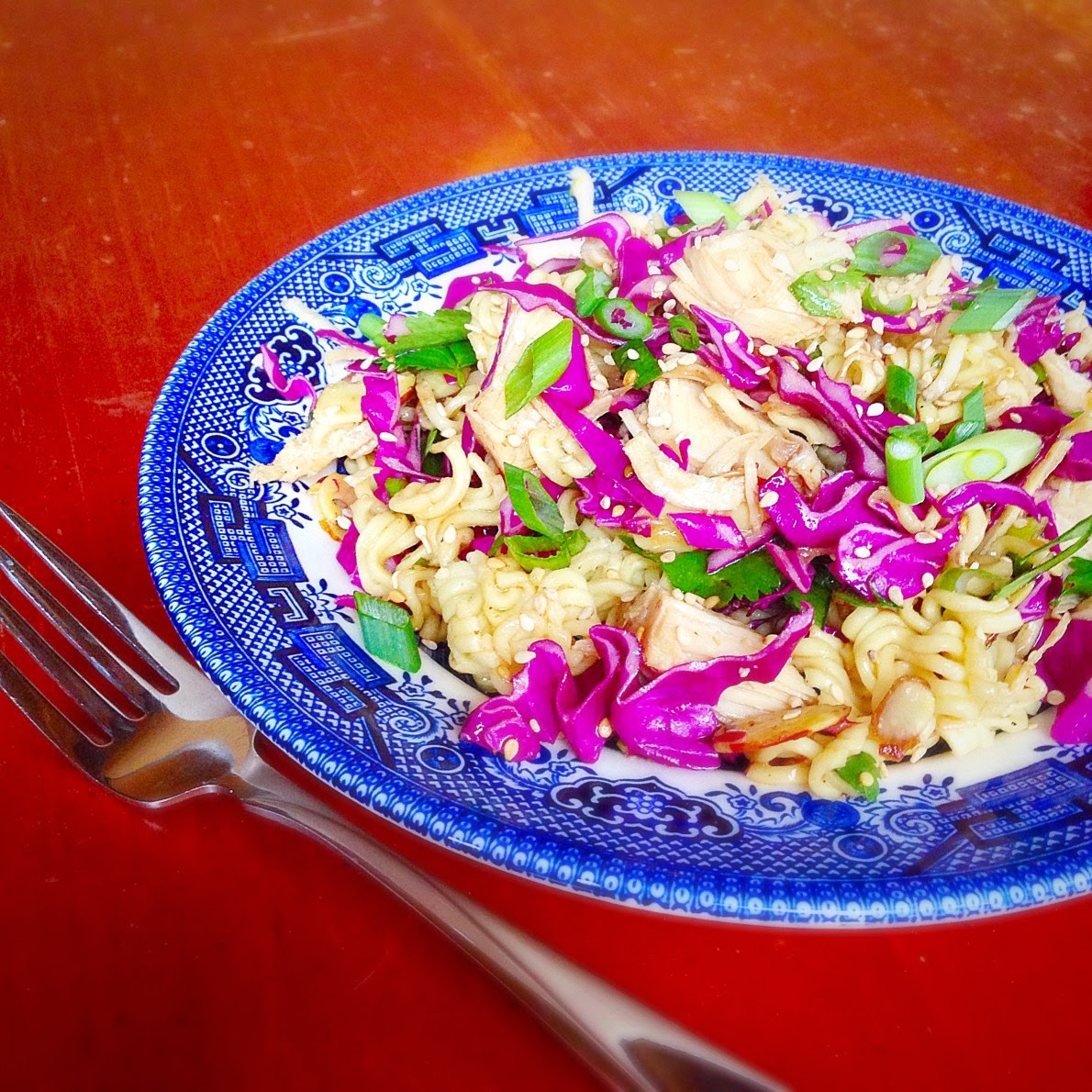 The Best Frosting Ever 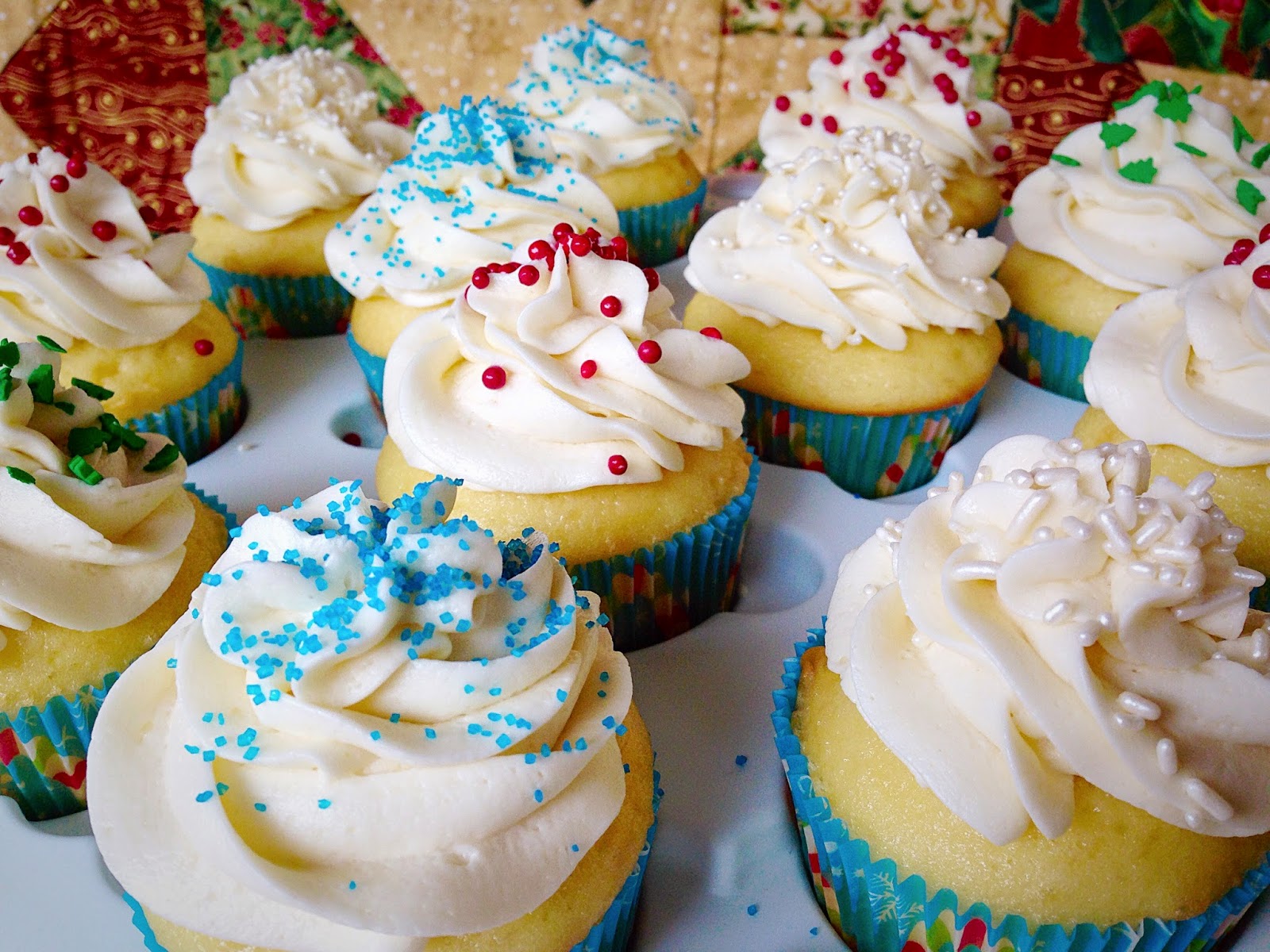 Once again, I am updating an old post with a new photo.  One that is prettier and more appealing!  This frosting continues to be a favorite and I always get asked for the recipe.  It's light and creamy and not too rich or sweet.  The recipe below makes enough to frost 24 cupcakes in the manner seen in the photo.  I use a large Wilton 1M tip and pastry bag (found at Michaels or Joann) to frost my cupcakes.  It actually makes quick work of it and gives a lovely presentation.  Here is where I learned how to do the swirls and my other favorite design with the 1M tip: the rose.  It's REALLY EASY.  I promise.

More often than not I use 1 tsp. vanilla extract and 1 tsp. almond extract* when making this frosting.  That seems to be the most popular flavor combo.  If you want a brighter white frosting, you'll have to use the clear imitation vanilla.  If you are going to use food coloring, I recommend the gel or paste varieties.  Liquid coloring thins out the frosting too much and you will not like the result.  And, as mentioned below, this frosting is best eaten the day of or at least after no more than 48 hours.  I typically make my cupcakes the day before, keep them in an airtight container, and frost them just before I leave/serve.

This frosting is to die for. It's like whipped cream. You MUST try it!

I've seen it in several places on the internet, so I don't know who came up with it first, but I used the recipe from OurBestBites. The Pioneer Woman also posted one on her Tasty Kitchen blog. They both include photo tutorials that are worth checking out. I recommend the one from Our Best Bites, because they get a better finished product.

This frosting is best eaten within 24-48 hours and does not do well in the fridge or in warm temps (above 80 degrees). Store the cupcakes in an airtight container at room temperature (65-75 degrees F).

Also, you can use any flavoring/extract you want: vanilla, almond, coconut, lemon, etc.


THE BEST FROSTING EVER (makes enough for 24 cupcakes)

In a small saucepan, whisk together flour and milk until there are no lumps. Stirring constantly over medium heat, whisk the mixture until it thickens: 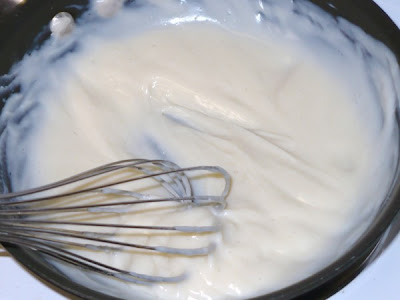 
If you screw up and get lumps (been there, done that), strain the mixture through a sieve, using a rubber spatula to press it through. Don't worry if it gets super thick. It will still work. Pour flour mixture into a bowl and refrigerate until cold (this can take up to 15-20 minutes).

In an electric stand mixer with the whisk attachment, beat butter and sugar for 2 minutes or until light and fluffy. Add flour mixture and vanilla extract. Now beat at a high setting until creamy and sugar is dissolved (this can take anywhere from 2-10 minutes - just test it with your fingers to see if it's still grainy). If it looks goopy and weird, keep beating.

Once frosting is creamy you can add gel or paste food coloring, if desired.
Posted by The Tall Girl Cooks at 12:30 AM 2 comments: