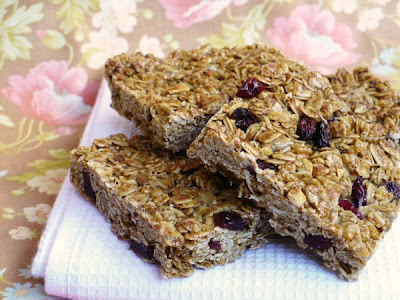 This recipe comes from the Pioneer Woman.  Does she make anything that isn't delicious?  I've made these bars twice now and my family loves them.

The first time I baked them for the full 20 minutes stated in the recipe and they turned out crun-chy!  Very similar to the original Nature Valley granola bars.  However, these homemade ones turn out thicker, so being thick and crunchy can be more time consuming to eat.  I don't mind it so much, but I do think it's hard work for little ones with small teeth and small mouths.

The second batch I only baked for 8 minutes and they turned out delightfully chewy.  I think this batch will get eaten a lot faster.  I know I can't stop eating them!

Preheat oven to 350 degrees.  In a bowl, toss the oats with the canola oil, melted butter, and salt.  Spread the mixture in a large, rimmed baking sheet lined with heavy-duty foil and toast in the oven for 15-20 minutes, stirring every 5 minutes or so to make sure they don't burn.  Remove from the oven and set aside.

**Reduce the oven heat to 325 degrees.**  In a medium saucepan, combine the brown sugar, honey, molasses, apple juice, and cinnamon (if using).  Heat the mixture over medium heat, just until it starts to bubble.  Remove from heat and stir in the vanilla.

In a large bowl, toss together the toasted oats, rice cereal, wheat germ, almonds, sunflower seeds or pecans.  Pour in the sugar mixture, stirring as you pour.  Toss in raisins, if using, until evenly coated.

Spray foil-lined baking sheet (the one you used to toast the oats) with cooking spray.  Press the granola into the pan (very firmly for chewy bars - so it really sticks together).  Bake for 8 minutes for chewy bars, 20-25 minutes for crunchy bars.  Remove from the oven and let cool completely.  Remove from pan and cut into bars with a sharp knife.  Store in an airtight container.
Posted by The Tall Girl Cooks at 8:00 AM No comments: 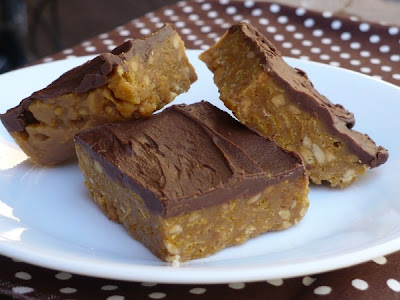 When I saw these on Food.com I knew they would be a hit with my husband.  He loves anything with peanut butter, especially chunky peanut butter.  They are super simple to make and require very few ingredients.  Just be careful not to overcook the peanut butter mixture or they will turn out really, really chewy.  Double the recipe if you want to fill a 9x13.

Line an 8x8 baking pan with foil and spray with cooking spray.  In a saucepan, heat peanut butter, sugar, and corn syrup over low heat until sugar dissolves.  Stir in cereal.  Pour mixture into prepared pan and pat smooth.

Melt chocolate chips with butter over low heat or in the microwave; spread over peanut butter mixture.  Cool until firm.  Remove from pan and cut into squares (makes 16).
Posted by The Tall Girl Cooks at 8:00 AM No comments:

Email ThisBlogThis!Share to TwitterShare to FacebookShare to Pinterest
Labels: Brownies and Bars 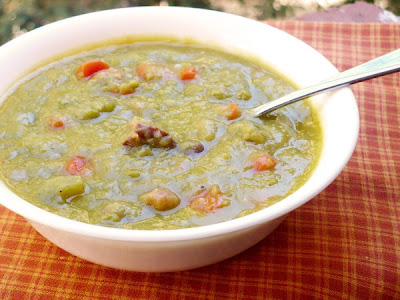 When I was a kid I thought split pea soup was disgusting.  I couldn't get over the color and texture.  Thankfully, I grew up and now appreciate this filling comfort food.  And so does my 8 year old daughter, surprisingly.  She tells me it's her favorite soup!

If you want soup with a thinner texture add more water.  I like to stay conservative in the recipe because you can always add more water, but you can't take it away (well, not very quickly).  And remember, the soup thickens as it cools.

Remove bone, cut off meat, and return to pot with carrots and celery.  Continue to simmer another 30-40 minutes, uncovered, until veggies are tender.  Remove bay leaf, add more water if desired, and season with salt and pepper.
Posted by The Tall Girl Cooks at 7:01 PM 1 comment:

Email ThisBlogThis!Share to TwitterShare to FacebookShare to Pinterest
Labels: Soups and Stews, Vegetables 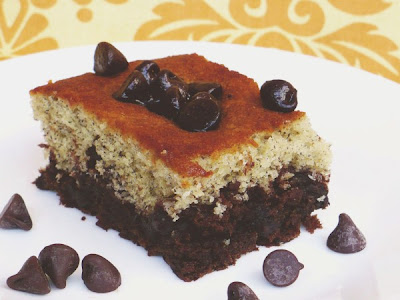 I got this recipe from my friend Carrie.  She originally found it in a Taste of Home magazine and now it's on the website.  She made them for a church gathering and I ate two and wanted more!  My husband is also a fan of these puppies, and he is not big on sweet stuff.

By the way, I am now sticking to name brand chocolate chips like I do with marshmallows.  The bargain brand chips I used in this recipe had a chalky texture once heated and were a total rip off.  Stick with the good stuff.  It's worth the extra 50 cents!

Preheat oven to 350 degrees.  In a large bowl, cream butter and sugar until light and fluffy.  Beat in egg and vanilla.  Stir in the bananas.  Combine the flour, baking powder, baking soda, and salt; add to creamed mixture and mix well.

Divide batter in half.  Add cocoa and mayo to one half; spread into a greased 9x13 baking pan.  Spoon remaining batter on top and swirl with a knife.  Sprinkle with chocolate chips.

Bake for 25 minutes or until golden brown and toothpick inserted in center comes out clean.  Cool on a wire rack.
Posted by The Tall Girl Cooks at 9:17 PM No comments:

Email ThisBlogThis!Share to TwitterShare to FacebookShare to Pinterest
Labels: Brownies and Bars 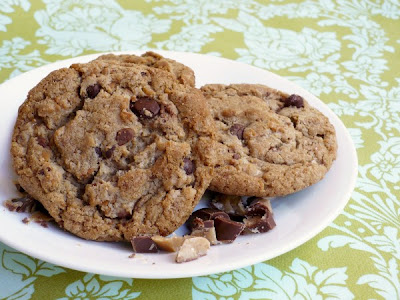 At first I was hesitant to post another cookie recipe (I just did the chewy chocolate chip cookies!) but these were too good not to share.  I first found inspiration from this recipe on Two Peas & Their Pod.  I made them and they were definitely tasty, but they turned out a little dry for my taste.  I wanted something chewier and crispier.  So I went Googling and found something that was a little closer and decided I would just sorta combine and adapt the two recipes and hope for the best.  And it worked!

These are crispy on the outside, chewy in the middle and have the subtle toasted coconut flavor mixed with the gooey melted toffee....  Soooo good.  Next time I will use the mini semi-sweet chocolate chips so that the chocolate is spread out more evenly in the dough, but other than that I think these cookies are perfect.

For the toffee, I chopped up some Heath candy bars, but you can also find bags of toffee bits in the baking aisle.  I know Walmart has carried it (my local Fry's store didn't have them).

You definitely want to line your baking sheets with parchment paper (or grease them) because the melted toffee will stick to the sheet otherwise.  This is also part of the reason why the cookies should cool on the sheet for a few minutes before removing to a wire rack (it also keeps them chewy).

Preheat oven to 375 degrees.  In a large bowl, cream the butter and sugars.  Beat in eggs and extracts.  Add flour, salt, and baking soda and mix until combined.  Fold in toasted coconut, chocolate chips, and toffee.

Drop by tablespoonfuls on parchment-lined cookie sheets, about 2 1/2 inches apart (cookies will spread).  Bake for 9-11 minutes or until lightly golden.  Cool on cookie sheet for 5 minutes before removing to a wire rack.  Makes about 3 1/2 dozen cookies.

*To toast coconut:
Preheat oven to 350 degrees.  Spread sweetened, flaked coconut evenly on parchment-lined cookie sheet and bake for 4-8 minutes, checking often and stirring occasionally.  (Once the coconut starts to brown, it can burn quickly.)  Remove it from the oven when it's a light golden brown and let cool.
Posted by The Tall Girl Cooks at 8:00 AM No comments: 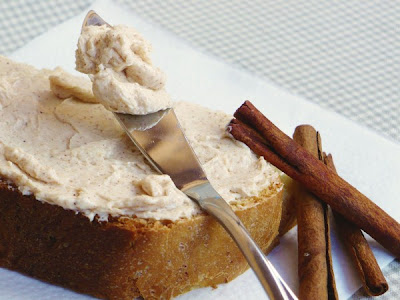 In many parts of the country (unfortunately not in my neck of the woods) it's the beginning of the beautiful fall season.  Boy do I miss it - the cooler weather, the changing leaves - but just because it's still 100 degrees here in Arizona doesn't mean I can't enjoy the food that signifies autumn!

I found this little gem of a recipe on Tasty Kitchen and loved it so much I just had to share.  I think it would be a great neighbor gift to go along with a fresh loaf of homemade bread!  A 4 oz. mason jar or small Ziploc container would do the trick.

Add all ingredients in a mixing bowl.  Whip on high using the whisk attachment of your mixer (or you can beat with a hand-held mixer).  When done, it should be light and fluffy.

Serve soft right after making or put in a resealable container and store in the refrigerator.
Posted by The Tall Girl Cooks at 8:00 AM 1 comment: