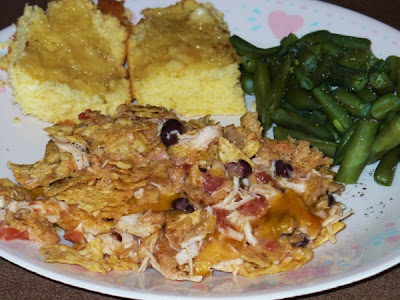 There are many variations of this casserole and I have no idea which one is the original. I really enjoyed my own version tonight, so I'm sharing it with you.

In a large skillet, heat olive oil over medium heat. Saute onion and garlic until tender. Stir in tomatoes, soups, and milk until combined. Add chicken, black beans, cumin, and chili powder and heat through. Pour over chips in dish.

Bake, uncovered, for 25 minutes. Remove from oven and sprinkle with cheese. Return to oven for 3-5 minutes or until cheese is melted.
Posted by The Tall Girl Cooks at 10:23 PM 1 comment: 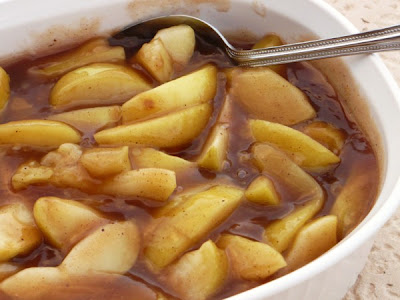 These are very similar to the fried apples you can get at Cracker Barrel. I found the recipe here and made some adjustments. I think the ones at Cracker Barrel simply have cinnamon in them (and maybe even butter?), but I'm not completely sure.

These are great as a side, over pancakes or waffles, or as a dessert with a scoop of vanilla ice cream. A fantastic fall comfort food for sure.

Do be patient as you heat them. It says to simmer gently, which helps prevent the apples from falling apart. I got impatient and turned my heat up too high and they started to boil and break apart. Once the cider heats up, the apples will cook fairly quickly. I have lots of broken apples in mine and at first I was devastated but then I remembered the ones at Cracker Barrel are often broken, too. So it's okay!

Combine apple slices and 2 cups cider in a large skillet over medium heat. Simmer gently, constantly turning apples until fork tender but not mushy. Remove apples with a slotted spoon and put in oven-safe dish.

In a blender, combine 1/2 cup cider, cornstarch, spice*, and sugar. Blend until smooth. Whisk into hot cider in skillet and increase heat to med-high. Whisk and cook until thickened and bubbly; pour over apples and serve warm.


*If you are like me and don't have Apple Pie Spice in your pantry, here is a substitute:

Go light on the ginger and cloves since they are pretty strong.

Or you can always just use a teaspoon of cinnamon. Still yummy!
Posted by The Tall Girl Cooks at 8:20 PM No comments:

Email ThisBlogThis!Share to TwitterShare to FacebookShare to Pinterest
Labels: Desserts, Fruit, Side Dishes 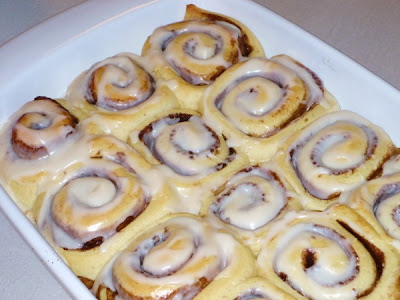 Of all the cinnamon roll recipes I've tried so far I like this one the best. It's fast and the rolls are nice and moist. I just don't have the patience to wait for dough to rise twice.

I have not tried freezing these rolls, but I imagine if you freeze them before they rise then thaw them in the refrigerator, they could work out.

The easiest way to cut cinnamon rolls is with dental floss, but a serrated knife works well too. If you want to try the dental floss method, cut a piece of dental floss about 18 inches long, slide the center of it under the rolled dough, cross the two ends over the dough and pull through. It makes a perfectly even and smooth cut.

I found this made about 18 one+ inch thick (when cut) cinnamon rolls. You could try either cutting them thicker to make an even dozen or put 12 in a 9x13 and 6 in an 8x8. I have a large casserole dish that I squeezed 17 into and the last one ended up in the sink. Next time I may just try cutting them thicker...

I halved the icing recipe for the rolls you see in the photo above. I wish I hadn't.

Combine flour, yeast, dry pudding, 1 Tbsp. sugar, and salt in mixing bowl. Beat in milk, water, and melted butter. Add egg. Once dough comes together, knead in mixer on 2nd setting for 8 minutes (or knead by hand on a lightly floured surface). Spray a bowl with cooking spray; roll dough into a ball and place in bowl, then flip dough over. Cover with a towel and let rest 10 minutes.

For icing, beat powdered sugar, milk, butter, and vanilla until smooth. Spread over warm rolls and serve.
Posted by The Tall Girl Cooks at 8:35 AM No comments: 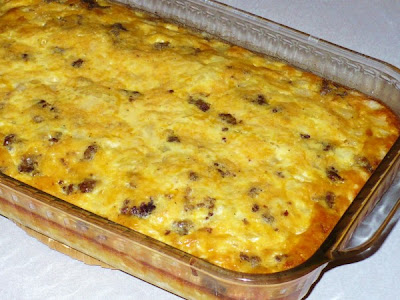 This is a Christmas morning tradition in our household. I got this recipe from my mother-in-law, Cindy. It calls for hashbrowns and honestly I prefer the shredded variety, but the diced kind (Southern style) work as well. You can use left over ham, bacon, or sausage. I don't use onions and green peppers because I have digestive issues with those two things, but I will add a Tbsp. or two of minced dried onion instead.

You can make this up the night before, refrigerate it, then bake it in the morning. If you do so, let it stand at room temp at least 15 minutes before baking.

Saute onion and pepper with chosen meat until tender (and meat is cooked through).

Preheat oven to 350 degrees. In a large bowl, beat eggs, milk, salt, and pepper. Stir in meat and veggie mixture, hashbrowns, and cheese. Pour into a lightly greased 9x13 baking dish. Bake for 35 - 45 minutes or until center is firm and edges are lightly browned.
Posted by The Tall Girl Cooks at 8:22 PM 2 comments: 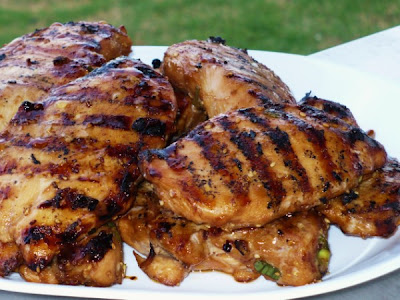 My mom grew up in Hawaii with lots of Asian influences. Hence, we grew up on this chicken. It is traditionally made with boneless, skinless chicken thighs, but since those haven't been on sale lately around here I made it with breasts. Breasts are okay, but the thighs tend to be more juicy and flavorful and I prefer them.

There is certainly enough of the marinade to reserve some for heating and serving on the side if desired. I like pouring some on steamed white rice. Yum!

Combine all ingredients in a gallon-size Ziploc bag and marinate in fridge for at least 2 hours.

Spray grill with cooking spray. Preheat grill to med-high heat. Grill chicken for 8-10 minutes or until done, turning once half-way through cooking time. Serve with steamed rice and veggies.
Posted by The Tall Girl Cooks at 5:48 PM 2 comments:

I've finally added the search gadget to this blog. So if you don't want to scroll through 10 recipes of cookies, you can just search for the specific one you want! Let me know if it works or if it doesn't.
Posted by The Tall Girl Cooks at 9:38 PM No comments: