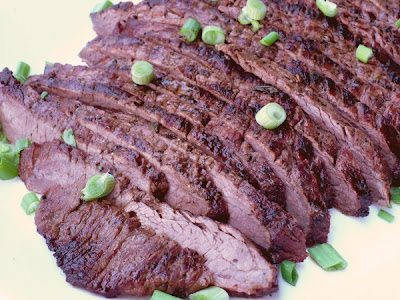 Here is another recipe I posted back in June of 2010.  Now that I have a nicer photo, I'm republishing it for those who haven't followed my blog for very long.  This is such a great recipe, I don't want it to get buried by all my subsequent posts!

This recipe came from my aunt Renee who passed away several years ago. She had many fantastic recipes (ex: Chinese Chicken Salad, Orange Jello Salad) and this was my favorite. The flavor is just amazing, especially if you let the meat marinate overnight.

The recipe calls for flank or skirt steak, which are pricier cuts of meat. You can make it using a London Broil (or Top Round Roast), which is typically a cheaper but tougher cut of meat. To tenderize it, sprinkle it with some unseasoned meat tenderizer and then attacked it with a fork. Stabbing it voraciously (on both sides) seems to help break down some of the tough connective tissues. Marinating it for at least 3 hours (overnight is best) will help as well because the acid in the lemon juice acts as a tenderizer.

When using a thicker cut of meat like the London Broil, you can prevent the meat from curling up on you during grilling by scoring it with a knife on each side in a grid pattern: 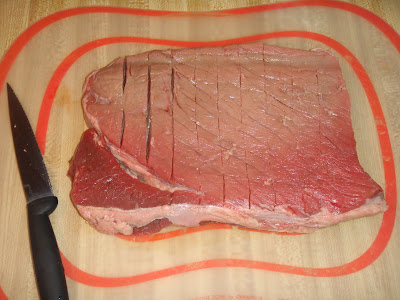 In the photo the scoring on the left-hand side is a little too deep. You're going for very shallow cuts, less than 1/8 of an inch. I like to do it in a diamond pattern because it looks attractive.

Also, once the meat has been grilled, let it rest for a few minutes before slicing. I usually put it on a platter, cover it with foil, and let it rest for 10 minutes. This gives the meat time to reabsorb some of the juices and will prevent it from drying out. However, you must realize that if you cook your meat to 'medium-well' or 'well done' that you are going to have drier meat.

Here is a link to a site that lists grilling times for various cuts of meat.

Preheat grill to high heat. Remove steak from fridge and bring to room temperature. Grill for 1-2 minutes and turn steak. Reduce heat to medium and cook until desired done-ness, turning once. Remove to platter. Cover with foil and let rest 10 minutes. Slice thinly and against the grain.
Posted by The Tall Girl Cooks at 8:00 AM