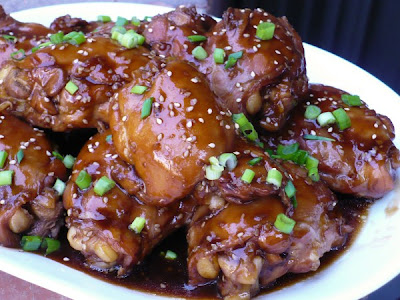 I originally posted this recipe back in October of 2009.  I never liked the crummy photo that accompanied it and I finally decided to update it.  I plan to occasionally update some of my older posts with new photos this year, but I'll still post new recipes as well.

This recipe comes from my mom. She grew up in Hawaii where you find a large mix of Asian cultures. Shoyu is the Japanese name for soy sauce.

In a large pot, stir together the soy sauce, brown sugar, water, ginger, garlic, and sesame seeds.  Add chicken thighs and stir to coat.  Bring to a boil, reduce heat, cover, and simmer for at least 30 minutes, stirring occasionally.  Remove chicken to a plate and whisk in cornstarch mixture to sauce; cook for another 2 minutes.  Serve chicken with sauce over white or brown rice.  Garnish with green onions, if desired.

I'm a disgrace. But I'm okay with it.

I've made this recipe countless times over many years and I love it. I could eat it every day. Thank you for this recipe!!!

Roulette wheels do have defects irrespective of how small they're. As a smart player, 카지노 사이트 you should be|you must be|you should be} on the lookout for slants, cracks, imbalance, and other manufacturing defects, so have the ability to|you presumably can} determine how the ball will fall in your favor. If you understand the roulette wheels inside-out, then you could be acquainted with big names like Abbiati, Cammegh and John Huxley is not going to come as a huge shock. As have the ability to|you presumably can} see, the two are different in terms of|when it comes to|by means of} the sequence and variety of pockets, as well as|in addition to} the home edge. However, the coloring of the slots is actually the same.