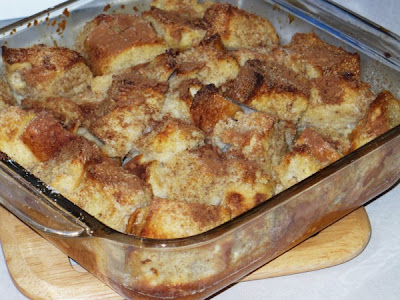 An easy way to get the french toast taste without all the hassle. This got two thumbs up from the hubby and kid. It bakes up fluffy and has an almost custardy texture. It's great with maple syrup but you could also sprinkle it with powdered sugar. I also like the idea of adding fresh blueberries and maybe cubes of cream cheese before baking. This is easily doubled if you want to make enough to fill a 9x13 pan.

You can make the casserole ahead of time, refrigerating it overnight and then baking it in the morning. Let it stand at room temp at least 15 minutes before baking.

In a large bowl, beat together eggs, milk, 2 Tbsp. sugar, salt, vanilla, 1 tsp. cinnamon, cloves, and nutmeg. Fold in bread cubes and press gently to help bread soak up egg mixture. Let stand 10 minutes then mix and press again. Pour into prepared baking dish. In a small bowl, combine 2 Tbsp. sugar and 1 tsp. cinnamon; sprinkle over casserole. Bake for 45-50 minutes, or until top is golden and casserole is set. Serve with maple syrup or a sprinkling of powdered sugar.
Posted by The Tall Girl Cooks at 8:43 PM

I'm all over this one...weekend breakfast. -Kari H.