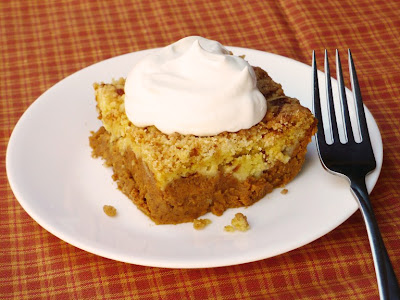 Holy smokes, I never meant to neglect this blog for so long!  First I came down with pleurisy in my right lung, so I was out of sorts for a week or two.  Then I was busy planning and executing our local Cub Scout Pack Meeting for December.  Then I was scrambling to finish preparing for Christmas.  Then I got sick again with a crummy throat bug (that just refuses to leave, dang it).  I actually made this yummy dessert at the end of November and it's been sitting in my pile of drafts, waiting to be finished and shared.

There are at least 100 different variations of this recipe on the internet.  Some call it a "Dump Cake," others call it a "Crunch Cake."  Personally, it reminds me more of a crisp than a cake, so that is what I'm calling it here.  The majority of the recipes call for 2 sticks of butter (gag) and suggest you just sprinkle the dry cake mix over the pumpkin filling, then pour the melted butter over.  The problem with doing it this way is you end up with some dry spots and those do not taste good at all.  I've found 1 stick of butter is more than enough, and by mixing the butter and cake mix before sprinkling it over the pumpkin, you get the proper proportions over the entire dessert, with no dry spots or greasy puddles.  Plus, it looks nice and crumbly, like a streusel topping.

I know the pumpkin season is pretty much over since we usually save pumpkin recipes for the holidays, but I encourage you to use up one of those last cans of pumpkin sitting in your pantry and make this dessert (especially since it's still cold outside).  It's a great alternative to pumpkin pie.  It's also a bit rich, so a small serving will usually be enough to satisfy.  I like it best when it's still a little warm, with a scoop of vanilla ice cream on top.  But it's good cold, too.  Just ask my daughter, who could have finished off the entire pan by herself if I let her.

In a medium bowl, combine cake mix and pecans, if using.  Stir in melted butter with a fork until crumbly.  There may be some big lumps, but you can break them up with your fingers.  Sprinkle cake mixture evenly over pumpkin mixture.

Bake for 45-50 minutes or until golden brown and set.  Let cool before serving.  Store leftovers, covered, in the fridge.
Posted by The Tall Girl Cooks at 10:07 PM