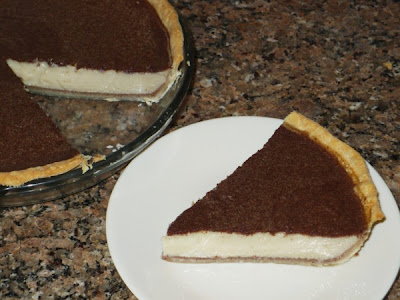 I have no idea who Bob Andy is or why this pie is named after him. From what I understand, this is a popular pie from Indiana Amish country. The brown "crust" on top is formed when the cinnamon rises to the top of the custard during baking.

The recipe calls for whole milk, which I didn't have, so I made it with 1% and it turned out just fine. I think it just lost some creaminess and fullness in the custard, but it's still delicious. I prefer it chilled but it can be served room temp.

Adjust oven rack to lowest position and preheat oven to 325 degrees. Crack eggs in a medium bowl; brush pie shell with a little of the egg whites. Whisk eggs until thoroughly mixed; whisk in milk. In a separate bowl, combine sugar, flour, cinnamon, and salt then whisk into milk mixture.

Set pie shell on oven rack and pour filling into shell. Bake until custard has set and crust is golden about 50-60 minutes. Cool on a wire rack and serve room temperature or chilled.
Posted by The Tall Girl Cooks at 8:36 AM

Email ThisBlogThis!Share to TwitterShare to FacebookShare to Pinterest
Labels: Pies