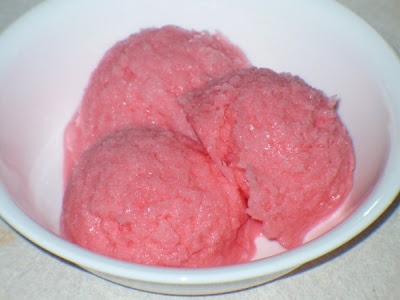 You are probably wondering, "What the heck is Guri Guri?" It is kind of a cross between ice cream and sherbet and can only be found at Tasaka Guri Guri in Kahului, Maui. My family has visited Maui a couple of times and there are two treats on that island that we always get: cream puffs from a bakery on Haleakala and Guri Guri in Kahului. Both are yummy.

We found a copycat recipe for Guri Guri (pronounced grr - ee grr -ee) in a Hawaiian cookbook. It's not the same thing but it comes close. The biggest difference is the texture. I've never been able to get it to be creamy like at Tasaka's. It's more icy like a granita. However, I've never tried making it in an ice cream maker. Can you put a carbonated beverage in an ice cream maker? Somebody please try it and let me know what happens!*

Make sure you buy a brand-name soda like Crush or Fanta. I bought a store brand this time and the flavor was weak. I've only ever made it with strawberry soda, but I don't see why you couldn't try a different flavor like grape or orange. And maybe if you added a teaspoon of vanilla to the orange it would taste like a Creamsicle? Who knows.

Don't be afraid of the ingredients. It sounds disgusting, but it really tastes good. This is a great treat now that the weather is heating up. My daughter wants some every 5 seconds.

*Update: my friend Tammy says that this can be made in an ice cream maker. That should help the texture be more creamy!

Combine both ingredients in a glass 13x9 baking dish. Cover with plastic wrap and freeze for 5 - 6 hours. When it is mostly frozen, scoop mixture into a large bowl and beat with an electric mixer until all lumps are gone. Cover bowl with plastic wrap and foil and return to freezer for at least 1 hour. Use an ice cream scoop to serve. Can be kept frozen for up to a week (although I don't recommend this because it will eventually start to taste like your freezer).
Posted by The Tall Girl Cooks at 11:42 PM

Email ThisBlogThis!Share to TwitterShare to FacebookShare to Pinterest
Labels: Desserts

I one did it with Fanta's pineapple soda and it wasn't half bad. Or the raspberry one. Now I want some.