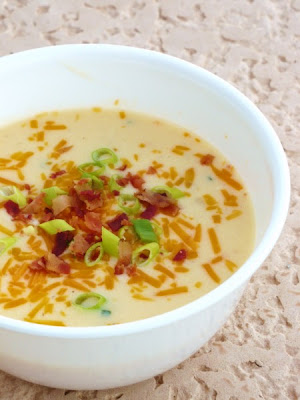 Threw this together last night. Caralie thinks it's "disgusting" but that's just because she doesn't like potatoes unless they are of the french fry variety. My father-in-law enjoyed it and I rather did too.

When reheating this soup the next day, add milk as the soup thickens significantly once stored in the fridge.

In a medium sauce pot, combine water and potatoes and bring to a boil. Reduce heat, cover, and let simmer 12 minutes or until potatoes are tender. Do not drain.

Meanwhile, in a large stockpot, melt butter over med-high heat. Whisk in flour and cook for 2 minutes, stirring constantly. Reduce heat to medium and slowly whisk in milk. Bring to a boil, stirring frequently. Boil for 5 minutes. Remove from heat and stir in cheese. Add potatoes and water, onions, bacon, sour cream, pepper, and salt. Use a potato masher or whisk to blend soup but leave chunks of potato for texture.


*I usually only peel half of the potatoes because I like having some skins in the soup for texture.
Posted by The Tall Girl Cooks at 5:05 PM

Email ThisBlogThis!Share to TwitterShare to FacebookShare to Pinterest
Labels: Potatoes, Soups and Stews

This is yummy! Thank you for the recipe.