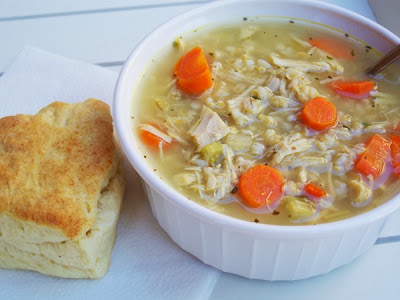 This is just a variation of the classic chicken noodle soup.  I wanted to try adding barley instead of noodles and I was pretty happy with the results.  The barley adds a great chewy texture and is very filling.  I just throw all the ingredients in a pot and let it simmer.  You could just as easily make it in a slow cooker, so I've added instructions for that as well.

Stove top instructions:
Combine all ingredients except salt and pepper in a large pot.  Bring to a boil, reduce heat, cover and simmer for 45 minutes - 1 hour.  Remove chicken and shred, then return to pot.  Season with salt and pepper.

Slow cooker instructions:
Combine all ingredients except salt and pepper in a slow cooker.  Cover and cook on LOW for 8-9 hours.  Remove chicken and shred, then return to slow cooker to heat through.  Season with salt and pepper.
Posted by The Tall Girl Cooks at 8:00 AM