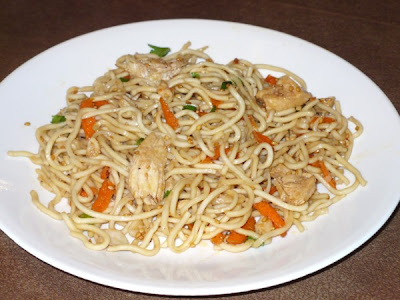 As usual, I've adapted this recipe from one I found on Allrecipes.com.

The original called for bow-tie pasta. Um, yeah. Nothing says "Asian" like bow-ties. So instead I used Ramen noodles. I had some from an Asian market but you can use the packages you buy for super cheap at the grocery store or Wal-mart. Doesn't matter what flavor because you are only using the noodles.

Also, it calls for rice vinegar, but I didn't have any so I used red wine vinegar and it tasted just fine. So if you are like me and don't have rice vinegar, just substitute with what you do have. (Rice vinegar, sesame oil, and sesame seeds should be found in the Asian section at your grocery store).

One more note: I think this dish could benefit from some sliced or slivered almonds. Just a thought.

Heat a skillet over medium-high heat. Add sesame seeds and cook, stirring frequently until lightly toasted and fragrant. Remove from heat and set aside.

Bring a large pot of lightly salted water to a boil; add pasta (break each brick into at least 4 pieces so the noodles aren't too long) and cook 3-4 minutes or until slightly tender but not soft. Drain and rinse in cold water until cool. Transfer to a large bowl.

Pour dressing over pasta and toss to coat evenly. Gently mix in chicken, cilantro, green onions, and carrot. *Sprinkle with almonds.
Posted by The Tall Girl Cooks at 7:05 PM