I had two different recipes for this pie: all the same ingredients but in different amounts. After making one last night and seeing it fail to set up, I now know the right one to use! So I'm sharing the good recipe. I'd take a photo of the pie I made but it's just too depressing to look at. It still tastes DELICIOUS. Here is what it should look like: 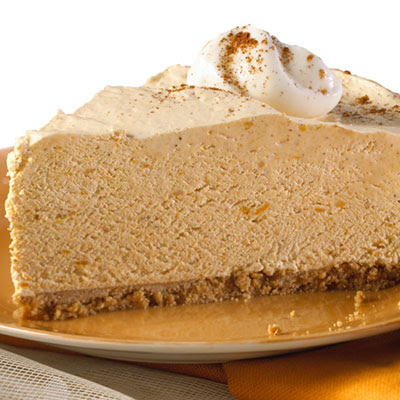 So this is a fast and easy pumpkin pie. Essentially pumpkin pie with the Cool Whip already mixed in. It calls for a graham cracker crust, which is fine, but I think shortbread would be better. Or the best might be a pre-baked pastry pie crust (I like Mrs. Smiths brand best). I also found Pumpkin Spice flavored Jell-o pudding so I used that instead of vanilla. You can find the original source of the recipe here.

In large bowl, beat milk, pudding mix, and spice with wire whisk for 1 minute (mixture will be very thick). Whisk in pumpkin. Fold in whipped topping. Spread in crust. Refrigerate at least 2 hours. Store in fridge.

What a wonderful mind blowing recipe of the creamy shades on the pie with cake of the filled to the taste. The pumpkins that to filling the creams have see the recipe was great time and top essay writing are not any recipe it the writers to write the wonderful lieutenant.

I know toe different recipe of this pie all the same ingredient but different amount. Always I made this buy essay cheap are the best part of this recipe is this very creamy and soft to eat.