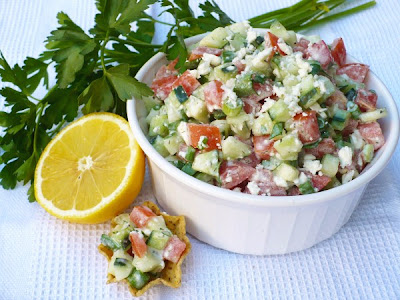 So... I am in love with this concoction.  I got the idea from this recipe on Kuntal's Kitchen.  I saw the photo on Pinterest and thought, "Greek salsa!"  But, no, it's actually a cucumber version of everyone's favorite southwest appetizer.  I did use it as a starting point to make the recipe shared here.  I wanted something similar to a Greek salad, but in appetizer form, and can I just say this stuff is addicting?  And actually GOOD for you?!  It's great served with tortilla or pita chips, but I like it with these:

Tostitos now has multigrain scoops!  Now I'm not stupid enough to think these are a health food, but they can't be any worse than regular tortilla chips.  And I like their flavor.  And they are perfect for scooping up the Creamy Greek Salsa!  (No, I'm not being paid to advertise - but I'd like to be!)

If you like Greek, check out Chicken or Pork Souvlaki with Tzatziki or this Seven Layer Greek Dip.

In a medium bowl, combine cucumbers, tomatoes, onion, parsley, and feta cheese.  In a small bowl, whisk together sour cream or yogurt, lemon juice, garlic, dill, pepper, and salt; fold into cucumber mixture.  Serve with tortilla or pita chips.  Makes about 4 cups.
Posted by The Tall Girl Cooks at 8:00 AM