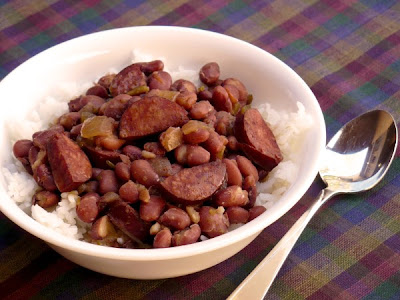 I don't think I've ever had from-scratch Red Beans and Rice before...  I usually buy the box mix from Zatarain's, and then I just use it as a side dish or wrap it in a tortilla with shredded cheddar and sour cream.  Sooo authentic!  But recently I saw (on Pinterest, where else?) a recipe for red beans and rice in the slow cooker and I figured it was time to try making it from scratch.  Especially if it was something I could make ahead and let cook all day!

If you want to be authentic, this dish should be made with Andouille (pronounced "an-doo-ee") sausage.  However, it packs a spicy kick and can be hard to find - I searched 4 different stores before finding this brand at my local WinCo.  If authenticity is not your priority, you can certainly substitute it with a simple smoked sausage.  Hillshire Farms seems to be the most popular brand of smoked sausage around here.

As for Creole seasoning, I use the Tony's brand and find that it's usually pretty cheap (as in under $2).  If you'd rather make your own (and therefore control the heat by increasing or reducing the cayenne pepper) here is a popular recipe.

Rinse and sort beans, removing any rocks or pebbles (yes, I've found some before).  Add all ingredients, except rice, to slow cooker and cook on HIGH for 7-8 hours.

This is a rather soupy version of red beans and rice.  If you'd like to thicken it up, scoop up about 1/2 cup of cooked beans and sauce and puree, then stir it back into the pot.  You can also try leaving the slow cooker uncovered for the last hour of cooking.  Serve over rice.
Posted by The Tall Girl Cooks at 8:00 AM