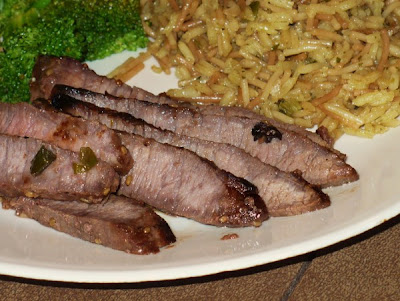 I think this recipe originated from a local Hawaiian cookbook that belonged to my grandmother. It's packed full of flavor. It calls for flank steak, but as I've mentioned in past posts you can do it with a cheaper cut of meat such as London Broil. When using a cheaper, and thus less tender, cut of meat, you can tenderize it by stabbing it like crazy with a fork. And the longer you marinate the meat, the more tender it will be (overnight is best).

I just realized I've never discussed using fresh ginger root. If you aren't sure what it looks like, here is a picture: 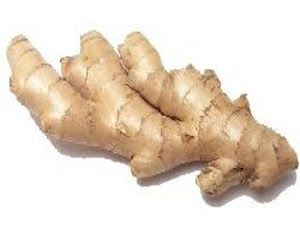 When picking out a root at the grocery store, choose one that is firm, not soft or squishy. I also try to pick one that doesn't have too many "arms" coming off the main body, mostly because it's easier to grate.

I know a lot of people peel the outside skin off, but I don't bother. I actually keep the root in a freezer-weight Ziploc bag in the freezer. It will keep for a long time as long as you push as much air out of the bag as possible to keep it from getting freezer burn. When I need fresh ginger root I just pull it out of the bag, grate how much I need (without thawing it), and then put it back in the bag in the freezer until next time. I think I've had my current root about 6 months now. I've had one last as long as a year ... maybe more.

Combine all ingredients in a gallon size Ziploc bag and marinate for 4 hours or overnight.

Preheat grill to med-high heat. Grill 7-8 minutes on each side or until desired doneness. Remove to a plate and cover with foil; let rest 10 minutes. Slice against the grain to serve.
Posted by The Tall Girl Cooks at 7:59 AM